I’ve been thinking about a potential second Brexit referendum, where a three-option menu is given:

Three-way choices are alien to British experience of referendums, but don’t really pose great difficulties. First Past The Post (FPTP) is clearly undesirable, but instant runoff (IRV) and Condorcet voting are easy to implement and explain to the electorate. So I built a little simulation to help me understand the problem, particularly to look at the relative performance of IRV and Condorcet.

My conclusions in brief: Condorcet is much more likely to go for the compromise solution (the deal), IRV less so and FPTP the least. Condorcet also seems to correspond well with the average of the underlying utilities. When the population is skewed pro-leave or pro-remain, IRV and Condorcet give more similar results (because it becomes more of a two-horse race). Condorcet cycles are rare. Finally, FPTP is crap.

END_OF_DOCUMENT_TOKEN_TO_BE_REPLACED

Migration is a big issue at the moment in Europe, not least in the UK
where public fears about migration (stoked by a racist press and a Home
Secretary and now PM who, let’s say, seems to have a visceral unreasoned
belief that the presence of foreigners in some way harms Britain) lie
behind the Brexit vote.

There are other reasons for being interested in migration, of course.
For instance, I’ve been wondering a bit about gender differentials in the age profile
of migration and re-migration. So I started looking for data, initially
on the Irish CSO site, where I found annual year-of-age
population estimates.

END_OF_DOCUMENT_TOKEN_TO_BE_REPLACED

UCAS, the UK university admissions clearing house, have released data relating to ethnicity and admissions to English universities, in part in response to Vikki Boliver‘s research in Sociology suggesting that members of ethnic minorities are less likely to be admitted to Russell Group universities.

The analysis note with the release is sober and correct, showing a mostly consistent pattern of offer rates for ethnic minority students being lower (but not far lower) than expected. However, UCAS’s press release seems to have suggested that the effect is almost explained away, and attributes it to ethnic minority students disproportionately applying to courses with low acceptance rates. This does not seem to be the case.

Elevation data for large swathes of the planet have been collected by NASA and are available to download from http://dds.cr.usgs.gov/srtm/.

The data is contained in binary files, each representing a 1-degree by 1-degree “square”. Here are five lines of Python and four lines of Stata that will turn the data into a simple graph: 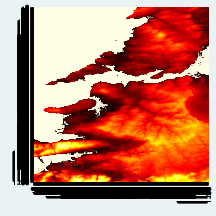 You may need to install Python’s struct package, and Stata’s hmap add on, but they’re available from the usual locations.

There are better ways of doing this, of course: it’s slow, the aspect ratio is wrong, the colours are not ideal and the axis labelling is bad. Even worse, it is a complete abuse of the hmap add-on. It’s a quick and dirty way to turn binary data into pictures, all the same.

In Studer et al (2011) an important new tool is introduced to the field of sequence analysis, the idea of “discrepancy” as a way of analysing pairwise distances. This quantity is shown to be analogous to variance, and is thus amenable to ANOVA-type analysis, which means it is a very attractive complement to cluster analysis of distance matrices.

This has been implemented in TraMineR (under R), along with a raft of other innovations coming out of Geneva and Lausanne. Up to now it hasn’t been available elsewhere. I spoke to Matthias Studer at the LaCOSA conference, and he convinced me that it was easy to code, and that all the information required was in the paper. This turned out to be the case, and I have written an initial Stata implementation. END_OF_DOCUMENT_TOKEN_TO_BE_REPLACED

However, recently I came across an extreme case of sensitivity. END_OF_DOCUMENT_TOKEN_TO_BE_REPLACED

There are really three main ways of interacting with Stata:

Batch mode is critical to reproducible, self-documenting code. Even if you don’t use it, its existence is a reflection of the idea of a single do-file that takes you from data to results in a single movement. Most people use Stata through the GUI, most of the time, though, even when their goal is a pristine goal-oriented do-file. Stata’s GUI is clean, efficient and pleasant to use.

Console mode, on the other hand, is like the dark ages: a text mode interface (reminiscent of the bad old days before Windows 3.1, of DOS and mainframes). Why would anyone use it? END_OF_DOCUMENT_TOKEN_TO_BE_REPLACED

One of the key anxieties about sequence analysis is how to set substitution costs. Many criticisms of optimal matching focus on the fact that we have no theory or method for assigning substitution costs (Larry Wu’s 2000 SMR paper is a case in point). Sometimes analysts opt for using transition-probability-derived costs to avoid the issue.

My stock line is that substitution costs should describe the relationships between states in the basic state space (e.g., employment status), and that the distance-measure algorithm simply maps an understanding of the basic state-space onto the state-space of the trajectories (e.g., work-life careers). Not everyone finds this very convincing, however.

I’ve been playing recently with a set of tools for evaluating different distance measures, and it struck me that I could use them to address this issue. Rather than compare hand-composed substitution matrices, however, I felt an automated approach was needed: randomise the matrices, and see what the results looked like. Can we improve on the analysts’ judgement? What are the characteristics of “good” substitution cost matrices?

END_OF_DOCUMENT_TOKEN_TO_BE_REPLACED

J Scott Long has written an interesting book on Workflow and Data Analysis using Stata. It’s good stuff but I was disappointed to see he makes no mention of make and Makefiles.

What’s make? It is a simple and powerful way of describing projects, designed initially for building complex C programs on Unix, but capable of being adapted to many other uses. One is the data analysis workflow, where there are many many steps between the raw data and the final paper.

So I was pleased to see (from a Gary King tweet) that the current newsletter of the Political Methodology of the APSA is devoted to workflow matters, and it contains a mention of using make for managing data analysis projects in Fredrickson, Testa and Weidmann’s article (though in the context of R and LaTeX, rather than Stata).

END_OF_DOCUMENT_TOKEN_TO_BE_REPLACED

I use gnuplot and Stata to generate a heatmap representation of a square matrix containing a measure of closeness between 26 departments in a university. gnuplot is a general-purpose plotting program, and can be wheedled into doing a lot of things, but Stata’s graphics routines are also very general. Given data in i, j, n format (in blocks, that is with a blank line inserted before every change of value of i), gnuplot can generate a heatmap with code like the following: